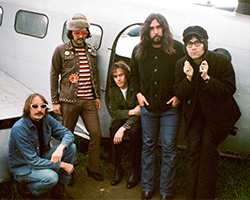 Mystic Braves might be rooted in the psychedelic scene of the 1960s, but the band’s moment is happening right now.

Based in Echo Park, Los Angeles—home of a white-hot garage band revival of which the Braves are at the forefront—this five-piece musical sensation started out as a hobby, but for the musicians involved has become much more.

Since the early days, Mystic Braves have gone on to release two full-length records—both recorded at Lolipop—and a single and have played extensively to ever-increasing crowds in Southern California and beyond. And the goodwill that their first songs garnered has never gone away.